skip to main | skip to sidebar

I played hooky all day and went to Victoria with my dear friend (and former boi/partner) Casey. We had so much fun. We took the Clipper up from Pier 69 (got to love that number) and ended up sharing a table with some delightful folk. Alice and her daughter Karen and Rollie and his son, Nate were the most notable.

Alice who is 86 was in the Northwest visiting her daughter. She jokingly said that she was homeless, since she had sold her home and was traveling around from kid to kid and staying with them off and on. She didn't look much over 75 and acted even younger. She regaled me with stories of her travels to Alaska. It also turned her daughter and I had something in common. Her father was a bodyman (worked on cars) just like my father and Karen, like me had worked with her Dad sanding and masking cars. It was odd to meet someone around my age who had shared that little bit of life with me. Not many women in their 50's can claim to have masked and sanded cars.

Then there was Rollie and his son. Rollie was in Washington celebrating his 70th high school reunion. Wow. He said there were 30 people who were attending. Very impressive. We all chatted and I helped them open the Dramamine tablets (the tablets were almost impossible to get out of their little plastic containers. I was the hero of our table.). And of course I flirted with both of them, especially Rollie.

Then Casey and I spent the day wandering around Victoria. We went to shops, bookstores and great Tapas restaurant, an amazing chocolate shop ( Chocolat Chocolatiere de Victoria, 703 Fort Street, Victoria, BC V8W1G9, (250) 381-0131 ), watched guys blow glass and just had an all round super time. On the way back to the Clipper we watched this incredible artist using just cans of spray paint make the most awesome art. (I'll find his url and post it later)

Then, when we got back in line to go home, we ran into all of the folks we had met earlier and also a couple gay guys that Casey had met that morning.

After the Clipper pulled out of the harbor, things started getting very interesting. We save a seat for Rollie and Nate and four very funny women sat next to us. We all chatted and laughed (in fact later the gay guys told me the regretted not sitting with us because we were having way too much fun). Early on we started talking about sex, embarrassing one woman so much she actually got up for awhile when (they two guys weren't in on the intial conversation.) Then we chatted about other things and all of us flirted shamelessly with Rollie who was delightful and flirted right back at us.

Later in the trip, one woman (who seemed very sure of herself and whose just screamed Dominant) was telling us how she punched out a former husband when he slapped and we all agreed that any man who slapped a woman should be punched out. I said something about unless it was consensual and mentioned spanking. And the women who had left earlier when we were talking about sex, smiled at me and said "that's right" and then said she and her husband did that. She smiled even bigger and said " I may look like MaryAnn but have a lot of Ginger in me . . . " I immediately gave her my Wet Spot card and while I was at it gave one to the very cool woman who I was sure was a bit kinky and also before we left to the gay guys (one of them looked at the card and said, "Oh, I've been there").


Oh, and the highlight of my day was when Rollie (the 89 year old) leaned over the table and said that he liked me and that I was pretty. I was very flattered. I then asked him if he had any money and he said yes, so I asked him if how his "ticker" was. He said it was great. I told him I was looking for a guy with money and a bad ticker so it probably wouldn't work between us. I also told him that I had enough long distance romances, otherwise I'd get his number. It was all very cool.

The point of this rambling travelogue with that I'm constantly amazed how often I run into sex-positive people in the most non-sexual places. I've learned that if I'm just myself, opportunities naturally arise to talk about who and what I am and do.

Goddess, I love my life.

For now, it's good night and Goddess Bless.


Here's a picture of Nate and Rollie 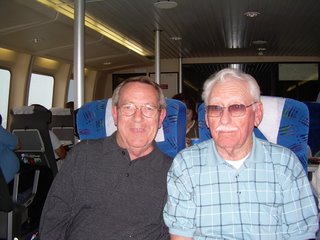 That's just SO cool! I want to go on a daytrip with you sometime! *~D

Going on a trip with Allena is always a blast. You never know who you'll meet and where the converation will go. I love to watch Allena at "work". I've never mastered the art of conversation with strangers, although I've had lots of practice, and seeing Allena in action is worth the trip by itself.

Victoria is a beautiful place. We found the best chocolate place and a wonderful used book store.

I highly recommend a trip there.

Allena
I have been an activist and educator in the sex-positive community since the early 1990s. Since 1999 I've been the Executive Director of Seattle's Sex-Positive Community Center, aka The Wet Spot, a non-profit organization which began with 60 members and under my steerage now boasts more than 8000 members. As Director, I organize social and education events. I also present sexuality workshops on a variety of topics around the country and in Canada. I am kinky and polyamorous. I'm currently in a poly triad, consisting of my wonderful partners Jim and Jennifer. I also have an incredible boy who bottoms to me who goes by the name, alex. I have other amazing people in my poly molecule that I'm sure I'll talk more about as time goes on. I am currently President of the board of Consolidated Art Works (www.conworks.org) a multi-disciplinary arts organization. Consolidated Art Works is the location of the Seattle Erotic Art Festival (www.seattleerotic.org) of which I am the Festival Director and which is produced by The Wet Spot. I currently volunteer monthly at Lambert House (www.lamberthouse.org) a drop in center for LGBT youth.